5 Situations When You Should Keep Your Mouth Shut 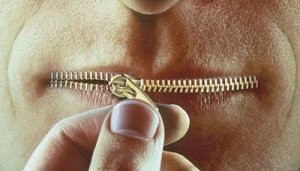 I like to listen. I have learned a great deal from listening carefully. Most people never listen. – Earnest Hemingway

It could lead you to engage with someone whose only goal is to start a conflict. When someone baits you into an unwinnable verbal duel, it’s probably because it affords them some type of gratification of acting out their argumentative predilections. If you get into the ring, it’s virtually guaranteed that a TKO will ensue— that is, stooping to their level is already a defeat. As Mark Twain said, “Never argue with stupid people. They will drag you down to their level and then beat you with experience.” If someone has already prodded you into responding to them, and is pushing for a second round, it’s wise to cut your losses and call it quits, recognizing that they’re only goading you to partake in an ongoing exercise in futility—or foolishness. Such tactics are best ignored, especially if they’re only indulging in mudslinging to feed illusions of being stronger or superior to others.

We have two ears and one mouth so that we can listen twice as much as we speak. – Epictetus

It would make you seem defensive or closed-minded. If someone is offering you constructive criticism, it may be important to put your ego aside and conscientiously evaluate the legitimacy of their viewpoint. In such cases, it’s much better to remain silent, listen attentively, and only then give a response (if at all). Whether, in the end, you agree with their unfavorable appraisal or not, it’s still in your best interest to open-mindedly assess its validity. For while you may be reluctant to hear it, what they have to say might still potentially be beneficial. If you can’t resist the immediate impulse to defend yourself, you may miss out on a valuable opportunity to learn something important about yourself.

It would only further intensify someone’s anger. When someone is far too fired up to listen rationally to anything you might say, it’s worse than useless to respond to them. Any response will probably be premature and serve only to make matters worse because it’s likely to be experienced as an interruption, as though you’re not really listening or taking the person seriously. In such cases—if there’s to be any hope of ultimately resolving the situation—it’s essential to devote all your attention to hearing someone out and giving them every chance to fully air their grievances. Only then might they be open to hearing your contrasting viewpoint, or interpretation.

One’s eyes are what one is, one’s mouth is what one becomes. – John Galsworthy

It would only intensify your own anger. Following your impulse to attack a person who just upset you is only likely to exacerbate things. Emotions are best kept at moderate levels. When they start to become really pronounced, your better judgment may be seriously compromised and you can react in ways you’ll later regret. Better to hold your tongue and do whatever you can to remove yourself from that situation. Remember, “never make permanent decisions based on temporary feelings”

Two monologues do not make a dialogue. – Jeff Daly

It would likely offend someone, without having any realistic possibility either of resolving the situation or improving the relationship. If you truly care about the other individual then there is no good reason to put them on the defense – especially a coworker or loved one. If you believe that this would fall under “feedback” then I would have you ask yourself, “what am I looking to communicate about this persons performance and how can I construct this feedback based on their tasks/skills and not emotions or personality?” The reality is that everyone is different and some people are kind, loyal, and supportive, but also quick to take offense and highly reactive to criticism. Other people’s rigidity makes it virtually impossible for them to appreciate a differing viewpoint. If an individual says or does something that bothers you, it’s generally best to overlook it and, find a way to resolve your immediate frustrations with them rather than confronting them directly.

It’s better to remain silent and be thought a fool than open one’s mouth and remove all doubt. – Mark Twain